Steins;Gate is an anime series I discovered on Netflix. Whilst at first I found it hard to get into, when coming to the end of the series I ended up binge watching it, hungry for more! It is also interesting to note whilst I have read a couple of manga series now that have been adapted from anime or films this is the first that was based on a visual novel video game.

The story of Steins;Gate takes place in Akihabara (a district in the Chiyoda ward of Tokyo) and follows a group of friends who customise their microwave so that it is able to send text messages to the past (Yes, that’s really the premise!) As they perform experiments using the device, an organisation named SERN who has been doing their own research on time travel hunts them. The manga adaptation of the story illustrated by Sarachi Yomi began serialisation in Media Factory’s Monthly Comic Alive magazine in 2009.

From first appearances the main protagonist Rintarou Okabe seems clearly insane and disillusioned. Even his friends question his sanity and try to rationalise his thoughts and feelings. Similar to other manga I have looked at the artwork is typical of other manga series and nothing really stands out in either a good or bad way. The character designs seem simple but again the way facial expressions are drawn emphasises emotion.

One thing that Steins;Gate does really well is defining the rules of time travel and what effects it has on the universe.  For example, they can only send texts with a limited amount of characters and there are core events that cannot be altered like the death of a character. I also think the complexity of the theories regarding time travel adds to the credibility of the series.

So, they use the microwave time machine to send a pager message to Rukako’s mum when she is pregnant with him telling her to eat more vegetables so that he can become a girl… and it worked?! 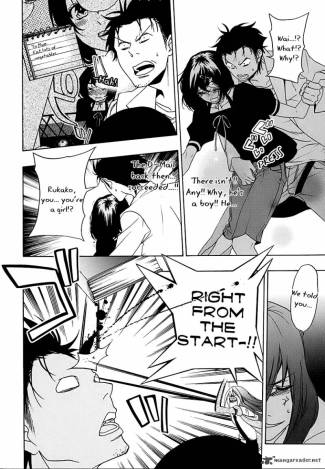 My only criticism for Steins;Gate was the complexity of the theories and really needing to concentrate to understand what was going on. [SPOILER ALERT] I also didn’t like the story arc that turned out Dar was actually Amane Suzaha’s father that she was searching for. It felt like such a cop out from having to introduce another character and still resolve her mission to find him.

I also found the end of the Steins;Gate manga ended in a weird place and didn’t seem to have a conclusive ending, however after a bit of research I have found various spin off manga series’ which may satisfy my need for more.

How did it compare to the anime?

Another thing I enjoyed was that most manga and anime series’ don’t seem to be able to pull off well is the love triangle trope but this is where Steins;Gate shines. All of the characters involved in the love plot are well developed and have unique personalities.  When the arc comes to the end, we really feel the struggle to choose which adds more tension and drama to the story.

What’s not to love about a series that involves a microwave that can send time travelling texts?

Whilst I did enjoy reading the Steins;Gate manga I would suggest watching the anime first to get a better understanding of what is going on. That being said I wouldn’t totally forget about reading the manga and I’m sure the spin-off series’ give a much more satisfying resolution and only adds depth and breadth to the original manga title.

Check out our own Welsh-manga (or ‘Wanga’) series, AGE OF REVOLUTION on our official site and Comixology! 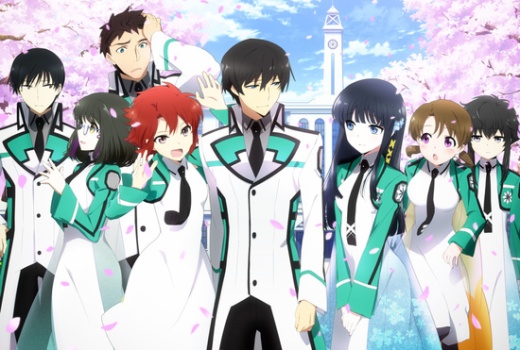 Mahouka Koukou No Rettousei or as it’s more commonly known The Irregular at Magic High School is was originally a Japanese light novel series written by Tsutomu Satō, with illustrations by Kana Ishida but in this review I am looking at the adapted manga series written by Fumino Hayashi and Tsutomu Satō with art by Tsuna Kitaumi.

The story is set in 2095, and follows Tatsuya Shiba and his sister Miyuki Shiba as new students that enroll at the Private Magic University Affiliated High School. Students are ranked according to their test scores with practical magic ability being the top consideration. Students with the best practical magic skills are enrolled in the Course 1 curriculum, while those with poorer practical magic scores are enrolled in Course 2. These different divisions are known colloquially as “Bloom” and “Weed”.

Miyuki topped the entrance exams and is selected to be the first years’ representative, while Tatsuya is placed in Course 2 due to his low practical magic test scores, despite scoring highest in the written/theoretical portion of the exams.

Did the illustrators get lazy with drawing faces? After the first few pages of the manga, the background characters are expressionless.

The manga also seemed to have a fluidity in styles as some of the panels seemed to be drawn in intense and highly detailed manner whereas others had a much simpler chibi style illustration to them. I’m not necessarily saying this is a bad thing just not what I expected after reading other manga that seem to have more of a consistent styling.

I really liked the fact that the series focuses heavily on the theme of bullying, discrimination, and exclusion between magic and non-magic disciplined students. It’s definitely something that most people can resonate with and relate to having gone through in school or university when you are excluded from an certain activity or picked on just because you look a certain way.

I also enjoyed the fact that the series mentions clubs and activities that appear to be similar to sports and societies in real universities and refers to “the period when club activities are recruiting new club members” which is essentially what a freshers fair is for new university students.

Another thing that I found really interesting in the manga was the way it explained different magical methods and practices.

I found the relationship between Tatsuya Shiba and his sister Miyuki Shiba to be uncomfortable as they act more like a couple than siblings the manga even comments on this itself. Whilst I believe it represented a forbidden love it was also awkward and incestuous.

Another thing that I was disappointed with in the series was how wordy it was and there didn’t seem to be enough action sequences. And where there were action sequences they seemed to be too short.

How does it compare to the anime:

I found the anime visually stunning, it was really colourful and bright compared to a lot of the other anime I have seen that are a lot darker both in terms of themes  and colour schemes. That being said I wouldn’t say it didn’t have any darker themes as it also comments on discrimination and terrorism. One of the scenes that particularly highlights the beauty of the anime series is when Tatsuya is explaining how he defeats Hattori.

One of the main differences in the anime and manga was that the anime seemed to have a lot more comedic moments in it, whether or not that was always necessarily intentional.

Yes, totally finished eating with a plate full of food.

And yes in case you were wondering, the relationship between Miyuki and Tatsuya is still as uncomfortable to watch as it was to read.  Tatsuya seems to be quite aware of him behaving more like a lover than a sibling to Miyuki and she is more naive which somehow seems to make it worse.  I think the other characters reactions sum this up perfectly!

Whilst I did enjoy reading the manga I found once again the series ended abruptly and left me wanting more which thankfully the anime seemed to satisfy this thirst for more. I’d definitely suggest not starting with the manga for this reason and just focusing on watching the anime series as it was a lot more satisfying not only in terms of visuals but also story as well.

Check out our own Welsh-manga (or ‘Wanga’) series, AGE OF REVOLUTION on our official site and Comixology!