[SPOILER ALERT: The results of battles/finales will be discussed in this post!]

My favourite anime fight is without a doubt between Titan Eren and the Female Titan in Attack On Titan. It’s absolutely epic and intense:

I’ve mentioned before that I’m not massively into shonen fighter anime like Dragon Ball and Naruto that specialise in big OTT fights that go on for ages, so my picks for this one are largely motivated by emotional intensity. And in that vein, I find myself really stuck between two particular fight scenes that come right at the end of two of my favourite anime series’, and both happen to be the brainchild of the great Shinichirō Watanabe.

The first scene I have to talk about as my top honourable mention is the finale of Samurai Champloo, in which wandering samurai Jin and Mugen square off against Shogun Kariya who has come to kill them for aiding Fuu in finding her father – a declared traitor by the Japanese Government. Mugen’s flashy breakdance-inspired moves are no match for Kariya’s minimal but effective swings, and soon it comes down to a classic one-on-one show-down between the two most-measured and skilled warriors: Jin and Kariya.

Jin goes up against Kariya.

You know this set-up so well it’s probably a cliche by now, but it’s none-the-less intense when replicated here. It has all the pacing and tension of a cinematic Western quick-on-the-draw fight, climaxing so quickly, you literally have no idea who the victor is at first:

But as brilliant as this fight is, I have to give my actual pick to the finale of Watanabe’s 1990s intergalactic adventure series’ Cowboy Bebop. Just like Samurai Champloo‘s ingenious blend of hip-hop with samurai cinema (‘chanbara‘), Watanabe feeds influences as diverse as film-noir, John Woo, jazz, sci-fi, and cyberpunk into Cowboy Bebop, making it one of the most original, stylish, and influential anime series of all time.

The final fight – as though a precursor to Samurai Champloo – is also a classic stand-off between our rogue hero Spike Spiegel and his friend-turned-enemy Vicious. At the top of the Red Dragon Syndicate skyscraper, the pair slug it out in a quick flurry of swords and guns, dancing in and out of the shadows. Both are furious, desperate, and resolved to end their feud once and for all – you can see it in their screwed-up expressions and hear it in their grunts of exertion. Spike is eventually victorious – but at a great cost. 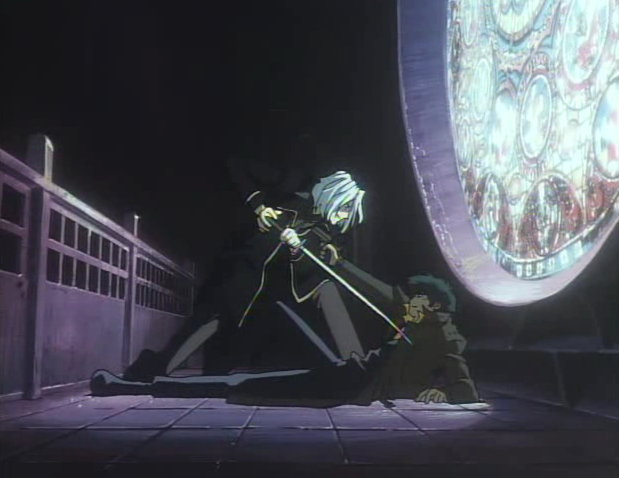 Spike and Vicious confront each other for the final time.

As he slowly limps out of the building, the shadows are dispelled by a bath of golden light pouring over him, and as his body crumples to the ground, the camera slowly zooms out until his body is almost too small to see, lifting up out of the city to the sky. This sudden contrast in light and tone somehow lifts the tension of the brutal fight into a peaceful ambiguity, and Yoko Kanno’s ‘Blue’ playing over the credits just completes it perfectly. We’re not completely sure if Spike is dead, but either way – his psychological turmoil that he has wrestles with throughout the series seems to have been resolved. I still haven’t gotten over the goosebumps it gave me years after first watching it!

I’ve talked a lot about Dragon Ball and One Piece already over this blog series, so I want to talk about an epic fight that isn’t apart of the gallery of epic DBZ and OP fights for this one.

The fight I want to talk about is Cloud vs. Sephiroth in Final Fantasy VII: Advent Children. Advent Children might not be a traditional anime, but I still regard it as an anime none-the-less.

This fight scene has everything you want from an epic anime battle: Huge swords, high jumps, crashing buildings, and glorious hair. The action is fast and fluid, and almost a little too fast for the eye providing a god-like quality to the combatants. My favourite part of the fight is when Sephiroth and Cloud are falling with the debris of a crumbling building that Sephiroth cut up, slicing chunks of the building to either dodge or attack and colliding mid-air, sword against sword, all happening while Sephiroth’s theme plays. Cloud’s final move is awesome as well, ripping Sephiroth to shreds. So cool.

Here is the full fight: