Who hasn’t wished this anime was real? What would be better than going on an adventure with your best friends to train and fight pet like creatures? Of course, I’m talking about Pokemon.

Pokemon was the very first thing that sprang to my mind too. I’ve been playing the games since they were first released and so I kind of feel like I’ve been living in them for about ten years of my life now anyway. I mean, it’s just the perfect fictional world to inhabit: close enough to our reality to be familiar, but different enough to be new and exciting; you can start your adventure from childhood into senility and have life-long, loyal companions; there are multiple jobs outside of being a trainer you could take on that still involve Pokemon; aside from past wars and eco-terrorists it’s relatively peaceful; and there are aliens, and dragons, and ghosts and…. POKEMON. FUCKING POKEMON. YEAH!

But, so as not to repeat Jess’ pick, I’m going to go for something completely different. Aside from Kanto, Johto, Hoenn and all the rest, my other favourite anime environments have to be High Schools/Academies/Guilds. Especially if they involve magic or some other weird specialist theme. And so in that vein, I think it’s a close toss-up between the Shibusen Academy from Soul Eater; True Cross Academy from Blue Exorcist, Binan High School from Cute High Earth Defence Club Love!, and the Fairy Tail Guild from Fairy Tail.

You know what? When I started writing this I was sure I was going to go with the Shibusen Academy, but on second thought the Soul Eater world – as cool and gothic as it is – also has a high chance of making you mentally unstable and/or getting you brutally killed by psychotic witches. So, for a more pleasant quality of life, I think I’m going to have to go with Fairy Tail.

Welcome to the Guild!

I mean, the Fairy Tail Guild is just like one big happy clubhouse. With magic! And adventures! And BFFs! And talking animals! And Gray’s abs…

Oh, what were you saying? I got lost in your six-pack…

And as much as I’d love to think that I would be a kick-ass, tough-talking Knight like Erza Scarlet, in reality I think I would wield far less physical magical abilities that relied on summoning other things to fight for me, like Lucy’s ability to use keys that summon Zodiac-themed creatures. Or maybe I would just choose to be an adorable animal sidekick like Happy. After all, cat’s do have the best lives, right? 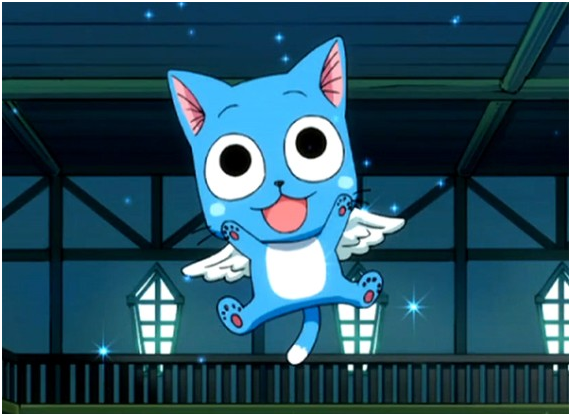 One of my favourite things to do it muck around with my mates, so now imagine if all my mates had superpowers, or are just stupid powerful, and now imagine we are all pirates. Yes, I would choose One Piece world to be real.

Squad goals = The One Piece.

Yes the world is kind messed up, but no more than this world. Just imagine what it feels like when you and your squad are out. It feels great, doesn’t it? Now imagine that but you’re also kick-ass pirates with superpowers taking down corrupt governments and living a life of freedom on the waves! Sounds like bliss to me.

Of course I would be constantly terrified of crossing the path of the wrong pirate, but as long as I have my crew with me and I learn at least one type of Haki, I’ll be sound. Plus, pirate ships are dope. *Drops mike.*

One thought on “30 Day Anime Challenge – Day 29: An Anime You Wished Was Real”